I'm home.  I'm back from Spokane and it feels good!  But---I hate to not be with these adorables. 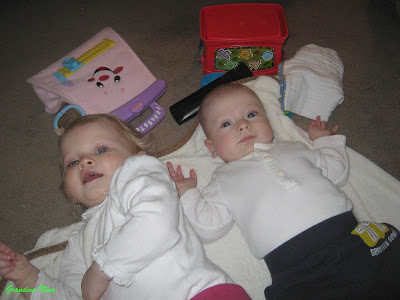 It is always so hard to say "Good-bye", especially when you know you aren't going to see them again for several months.  We're hoping they can come back home in June.  That's a long time!

Dee, Riley and Heath took me to the Spokane airport at noon on Sunday.  Riley cried and cried when I told her "Good-Bye" at the airport passenger drop off.  I HATE THAT!  I tried as hard as I could to hold back my own tears.  I hated to leave Dee, too.  We get along very well.  Both of my DIL's are like daughters to me.

I tried to think of the positive about coming back home:  I was going back to my hubby, parents, pets, and my other son and his beautiful family; I was getting back to my home that I love; I was looking forward to getting the Valentine and any lingering Christmas decorations put away; and I would be back on my OCD schedule.

I had one stop in Minneapolis, then on to Pittsburgh.  I wouldn't arrive in Pittsburgh until 10:30 p.m. with my hubby picking me up.  We then would have a three hour drive home from there.  Oh how I hate that part of any trip we take!  Years ago travelling was fun, and plane rides were exciting.  Not so much any more.

I was flying on Delta because that is usually the only flight from Pittsburgh to Spokane and vice versa.

There is no non-stop flight at all.  There is always at least one transfer.  Delta has got to be the most boring airline.  I have never been on a Delta flight with any type of media screen.  No TV or movies at all.  And of course the regular peanuts, pretzels and soft drinks.  You must have to travel around the world to get this accommodation advertised on their web site.

I've never been on a flight like this with Delta.
And it's not like I was flying from Spokane to Seattle or Salt Lake.  I was going across the country.  Even from Minneapolis to Pittsburgh was a three hour flight.  This is the little puddle jumper that we were on for that distance:

Here is the fun part of the story.  I was waiting at my gate in Minneapolis and dreading this flight to Pittsburgh.  It's dark now, I'm getting tired, and I'm hungry because I didn't have enought time between flights to eat.  Then walking toward me is a lady that I think looks familiar.  As she gets closer I realized that it's a very long time friend of mine, Holli, that I had not seen in five years!  We have know each other for 47 years, since the first grade!  There were many years in between that we hadn't seen each other at all due to moving long distances away.  Now she lives in Pittsburgh and had been visiting her nephew at Purdue and was also travelling back home with a connection in Minneapolis.  We just couldn't believe it!  Here we were on the same flight back home.  After asking my seat mate if he would mind switching seats, Holli and I were able to sit together and talk non-stop for three hours.  I was almost wishing the flight was longer because we had so much more to talk about.  Now we're planning a visit in the next couple of weeks in Pittsburgh so that our mothers can visit.  They were also good friends all those years ago.

What could have been a miserable and long trip turned out to be so much fun.  I didn't even notice the cramped, dark and boring conditions!  The peanuts and juice now tasted good, and it was a bright and comfortable ride.

What cute little babies - I can see why it was so hard to leave. Don't feel bad - we still have an occasional Christmas out that I've forgotten to grab and put away. I'm glad you had a happy and safe trip.

'After the tears the blessings came' That quote sprang to mind as I read your lovely post, Nina. Loved the picture of the babes, I can understand your reluctance to leave them but how great that you met your old friend and could have some catch-up time with her.

Oh how fun to see your friend and get to share the long ride home! I know you miss those sweet babies but just rest, refuel and you'll see them again soon!

hi grandma how are u...I just scanning your blog and learn some English words...
I guess you enjoy your vacation sorry only few words that I understand...

Hi, I'm your new follower from blog frog. You really lucked out. What a nice experience. :) Visit me at http://seriousmrse.blogspot.com and
http://thecomfortzonediversity.blogspot.cm

How amazing that she was right there at the same time on the same flight - amazing! Loved this story - glad I stopped by from SITS.

Not a Perfect Mom said...

stopping by from SITS to say hi!
those are some cutie patootie babes there! I can't even imagine my kids growing up and moving away..AAHH!

I popping in from SITS today to take a peek at your blog. And what CUTE babies those are :)

And I love it when fate tosses a friend back in our path.