Wellll, we went to church on Easter Sunday and then Dad and Bob went to pick Grandpa up from "The Manor" (nursing home) to bring him to brunch with us.  Mom had given the nurses instructions the night before that he was to be shaved, put on the suit she had layed out for him, and not to send him to the dining room for lunch.  Dad and Bob showed up to get him and he had not shaved, he had on his jeans and sweatshirt, and had gone to lunch.  The nurses put the blame on Grandpa and said he wouldn't cooperate, which very well could be true.  The guys got him shaved and dressed and after about 45 minutes of Mom and I waiting at the restaurant, the three of them slowly, and I mean very slowly, came walking in.  Grandpa looked good, but you could tell he was slightly confused and not happy about being brought there. 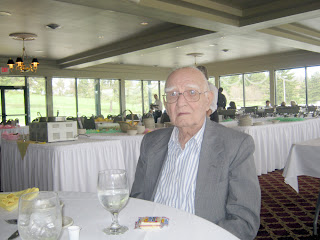 He wouldn't eat anything, said nothing tasted good.  At $16.00 a plate, by the way!  Which was OK, not the point.  I managed to find a few chocolate eggs hidden in the buffet table decoration that he ate.  Later in the afternoon, Mom and Dad took him back to "The Manor" and he was very happy to get back into his comfortable space, with all his familiar stuff around him.  He got back into his comfy clothes and wanted to go down to the dining room for dinner.
So now we know.  He  likes being where he is, and for that we are all grateful.  We would feel so bad if he didn't want to be there.  He's happy going to Dairy Queen once in a while, but that's about it.  He's happy when we come to visit him and bring him chocolate and marshmallows.  So now we know!
While we were at the restaurant I received a text picture from my DIL, Diana, with a picture of Riley in her Easter outfit. 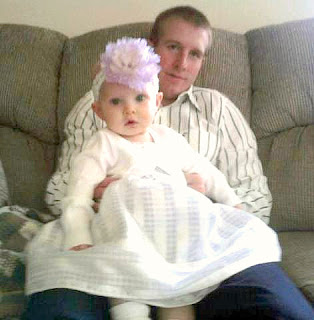 Isn't she just beautiful, sitting on her daddy's lap?  That's my son, Brandon.  I think he looks pretty cute, too.
I really miss them. They're in Spokane.  Dee and Riley will be home in a couple of weeks for her uncle's wedding.  Then in June Brandon graduates from his Air Force Survival Training School and Bob and I will be going out for that.
On Monday I received another text picture of Riley wearing the pink hat with the mink flower that I knit for her and had just sent for Easter. 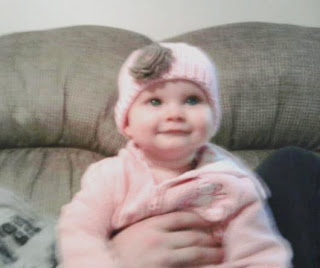 Is she cute or what??  Can you tell I'm really missing her?
at 9:37 PM 7 people had thoughts about this