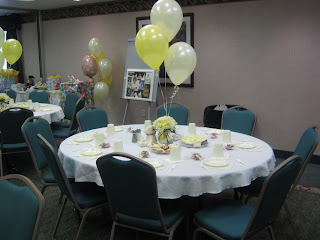 Sunday was the big day. The long awaited Baby Shower. It turned out so nice. Diana's mother, Lori, did most of the planning and most of the work and she did a beautiful job. Since we don't know if it's a boy or a girl, we went with yellow and cream. I would have loved it to be pink because, #1 - it's my favorite color and #2 - I have two brothers, two sons and two grandsons. I would just love to be able to make and buy little pink, frilly, lacey things. But as my grandmother says, "we know how to do boys". She's right, I certainly do love little boys. Hey, real boys can wear pink, right? It would never go over in this family. Anyway, I digress.
There were 75 people and the food was absolutely delicious. It was catered by a local little market that Brandon and Dee used to work for when they were in school. The centerpieces on each table were yellow and cream baloons and a teddy bear. The teddy bears on the gift table were "Brandon and Diane (Dee)". As some of you may know from previous posts, Brandon is in the Air Force. 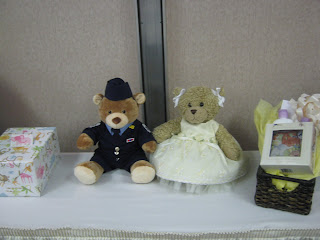 Lori and her mother, Grandma Bootie, baked cookies for 3 days that were so delicious. I feel a little guilty in that I would have liked to have done more to help, but Lori is very particular and likes to do everything absolutely her way. I can appreciate this since I am very much like that, too, so I could completely understand. I'm so lucky that Brandon's mother-in-law also is a friend of mine. He and Dee have known each other pretty much their whole lives, close to 20 years, and Lori and I the same. - I digress again-
I helped set up the tables, serve food and clean up.
Then the question came up, "Where are all these gifts going now"? Dee is living with us while Brandon is in training in Texas and her parents now live in Pittsburgh, about 90 miles from where we live. So we inherited the baby stuff. When 3 SUV's pulled in front of the house loaded down with baby stuff, my husband, Bob, couldn't believe all this stuff is needed for one little baby. He's now thinking there must be twins and we're not telling him.
The fun continues ---
The SUV's pull around back and unload into our basement, which is a finished family room. All three dogs (my two and Diana's one big one, Layla) come running out to meet us, so excited, along with the two grandsons in stocking feet. Bob was babysitting so that my other daughter in law could be at the shower. He's a great grandpa! Anyway, Layla is so worked up she throws up in the driveway and on the carpeted basement floor. Because of this, we knew that she had been eating poop earlier in the day. Yes, it was a terrible, stinky, gooey mess. Well, three year old stocking footed Landen stepped in it, so off came his socks and pants. He's so proud of his Sponge Bob big boy pants that he didn't mind. Then in all his excitement, he jumped up and turned quickly to run after something and banged his forehead right into the corner of the kitchen counter. He started screaming, Melissa (his mother) started screaming as blood started to cover his whole face, all three dogs started barking and I remained calm surprising even me. After washing his face and the cut on his forehead we determined that it really wasn't that bad and did not need stitches. The bleeding stopped rather quickly and I held him quietly. -I hate to say this, but I'm sure mothers and grandmothers will understand, they are so sweet when they're hurt or sick, aren't they? -
Everyone finally calmed down. Landon put his cowboy boots on and he, Melissa, and brother, Logan, left to go back home. Dee sat to put her swollen feet up, and I cleaned the carpet. 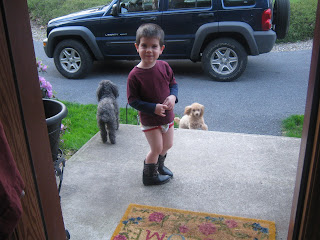 I was exhausted!
Still didn't sleep good, though. What's up with that?
BTW, I've posted a picture of the baby quilt I made on my other site: http://mycharmingcreations.blogspot.com/