We've been home for two weeks now, and it just seems like it's taken me this long to get all re-organized again.
Our son, Brandon, is in the Air Force and is stationed in Spokane. His wife, Dee, and 2 month old baby daughter, Riley, moved out with him finally on July 26.
My Bob and I volunteered to drive the loaded U-Haul cross country from Pennsylvania to Spokane. We had never seen that part of the country from the road and we wanted to see where Brandon and Dee would be living. We had a wonderful trip and loved every minute of it and we're so glad we drove it, but once was enough and from now on we'll fly. 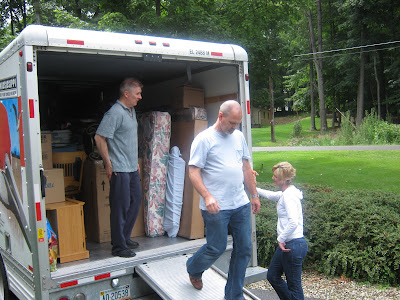 Arrangements had been made for the dogs, the cat, the plants and flowers. On Saturday, July 18, Bob and Dee's dad, David, loaded the U-Haul and Sunday morning my Bob and I crawled into the cab of that 17 foot truck. I had my thermos of food and water, my pillow and afghan, my knitting bag, and my journal and camera. We were all set. I had my new summer sweat capri's from Wal-Mart and tank tops and T-shirts. That's the only way I can travel. I just can't sit that long in jeans or anything tight at the waist. Danskin capri's from Wal-Mart are the best. 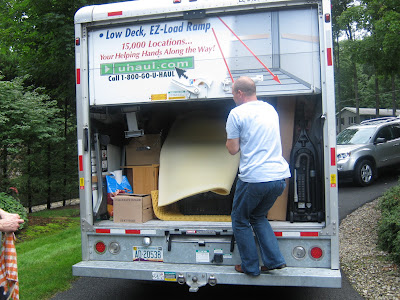 Closing the door - no more room

We're off ---and the trip up to Chicago was very boring. Maybe partly because we had seen all that before, but mostly because it's just very boring. We stopped at several truck stops along the way. Now there's some entertainment if you just sit in the parking lot and look around. Some wild sights to be seen. We saw one trucker picking up a hooker (or so it looked like) and then they just made out next to the truck. I felt naughty for watching. I said to Bob, "maybe people are watching us and think I'm a hooker that you're picking up". We kind of had fun with that, making up different scenarios in our head. And I could have possibly made up that whole trucker/hooker thing I witnessed, but that's sure what it looked like. I'm just a very sheltered small town girl.

We had to stop quite often, actually, because the truck only got about 10 miles per gallon. But that was OK. I really did enjoy the truck stops and rest areas. Good people watching. I would make up all kinds of stories in my mind about people I saw. We continued on, I-80 W. through Indiana, past Notre Dame, I-90 W. into Illinois, then around Chicago. We hate Chicago (no offense to those that live there). It's just way too much traffic, congestion, toll booths, and too many people. Not our way of life. We were tired, but wanted to get to the other side of Chicago to spend the night or we knew we would have too much traffic to deal with on Monday morning. We made it to Rockford, IL, found a Super 8, day 1 done. So far, so good, except for Chicago.