This is a hard one to write but I feel I have to.  It's sad and depressing and it was a major event in our lives.  We just have to live through it as best we can and then continue on looking for the good, being positive, and knowing that you have to accept the sad with the joyful. 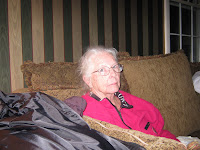