The funeral for Grandma on Saturday went well, for being a funeral.  Many out of town family members came into town for the weekend, which was so nice to see.  By Sunday at noon all the family had left to return home.  At 2:00 in the afternoon My Bob left for Pittsburgh airport to then fly to Orlando for a two day business meeting.  I was alone, it was quiet, and I thought I would spend the next two and a half days just resting, cleaning and doing laundry from the family guests, and then knitting and sewing.  Well, that was wishful thinking.
Sunday night actually was very nice, relaxing and quiet.  I was just so tired that I knit for a little while and then went to bed by 10:00, which is about two hours earlier than normal for me.  Monday morning I woke up with the intent on going with Mom and Dad to the cemetary to witness the burial of Grandma.  I threw a load of sheets into the washer and as I was getting some mail together to take with me to the post office I heard a loud screech from the laundry closet, then I smelled smoke.  As I walked toward the laundry I saw smoke.  I immediately called the appliance store where we purchase almost all our appliances and they said they would be out sometime during the day.  So I didn't go to the cemetary and I waited until they showed up around noon.  The diagnosis: the clutch had locked up and you can't just replace the clutch since it's enclosed in the transmission, so they would need to order a new transmission and then take the washing machine into the shop, take it apart, replace the transmission and put it back together.  How long was that going to take and how much was that going to cost?  In the meantime I wrung out the wet sheets as best I could and threw them in the dryer.  The pile of more sheets and towels sat there to my disgust.
This morning my handy dandy appliance man called to tell me the cost to repair would be a little over $300 and he could have me a brand new washer by this afternoon for $450.  So that's what I went with.
Then my DIL called and she was coming into town for an appointment.  I told her over the weekend that the next time she came to town, or I went to her house, we would make a trip to JoAnn Fabrics to pick out the fabrics for a new baby quilt for Leanna, due in July.  We agreed to meet at 11:00 so that I could be back home by noon so I wouldn't miss the delivery of my new washing machine after noon.  The colors of her nursery are pink and chocolate with teddy bears,  so this is what we chose. 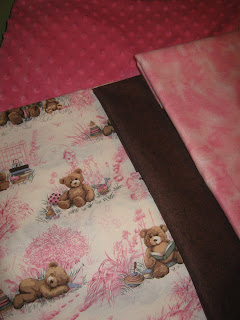 Won't this be cute?  The pink puffy flannel on top will be the back.
As I waited for my new washing machine to show up, I was cheered up some more by the UPS truck dropping off a package for me.  It was my Pajama Jeans that I had heard about and ordered on line a month ago.  I was so excited.  I unwrapped the package and read the attached tag that said, "Wash in cold water before wearing because of the dark blue dye."  You really realize how much you need a washing machine when you don't have one.  I tried them on anyway and instantly fell in love.  They look like blue jeans, but feel like sweat pants.  Exactly what I have been searching for!   They fit and feel so good. 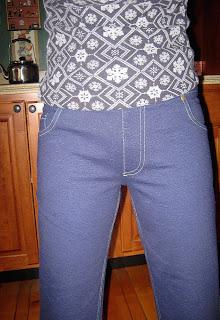 I took my own picture so it took several takes to get this.  Love Them!
Finally, the big present for the day, my washing machine arrived.  It's just a nice, but very basic white one.  I only have a small space so I can't get anything big and fancy and bulky.  But that's OK.  My laundry room is actually a double closet in my hallway right outside my bedroom.  I love it there as it's so convenient.  I fixed it up to look as much like a laundry room as possible. 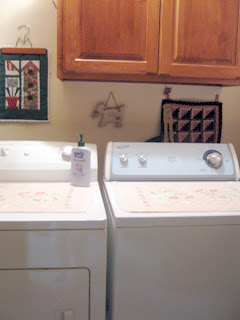 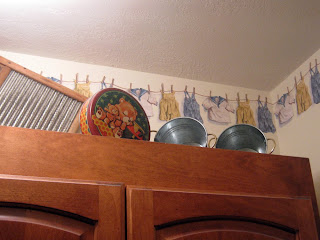 I made the little mini quilt on the right to cover up the knobs and tubes.  The little laundry hanging above the cupboards was actually a wallpaper border that I fussy cut around each little piece of clothing and then hung it up so it actually looks like it's handpainted instead of walllpaper.
After I cleaned the floor and carpeting from the mess of the appliance men, I was back in business.  My new Pajama Jeans are washed, the sheets are now all clean, and the quilt fabric has been pre-washed.  It ended up not being such a bad day after all.  I would have rather not had to spend the money for the new washing machine at this point, but what was I to do?
Now I kind of wish that My Bob was going to be away for one more day  because I think tomorrow I would have been able to finally relax a little more.  But he's due home very late tonight so tomorrow will be back to work.  For some reason when he's home it's just a lot more work --- as much as I love him!
at 7:44 PM 9 people had thoughts about this