I was making great progress on getting my yard, deck and gardens cleaned up early this year since the weather has been so warm and beautiful.  It was obviously too good to last because today is freezing and I even see a few snow flurries out my window!  My rhododendron bushes in front of the house just started to bloom and now I'm afraid they may freeze. 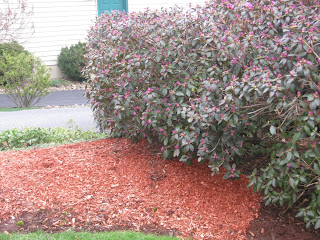 See the pink buds on there?  Some have even opened up.  Now also notice the start of new red mulch around the bushes.  There's a story about this red mulch that my husband won't shut up about.  I was accomplishing so much outside and I needed red mulch like right now.  This was yesterday.  My Bob was busy working so I thought, well, I'll just call the landscape/stone yard myself and have it delivered.  I consider myself a pretty intelligent person and I also consider myself a little bit of a perfectionist, but two things that I am really poor at is judging distances and measurements.  So when the lady asked me how much I needed I asked her to quote me amounts.   So she said three scoopfuls would cover approximately 130 square feet.  I thought that sounded like a lot.  I said, "good, how much to deliver?"  and she said, "$65.00".  The other place I called quoted me $70.00 so I told her that sounded OK and to please deliver that afternoon.  Well, when the big dump truck pulled up and dumped this little bit of mulch in my designated area I couldn't believe that's all there was.  I was hoping none of the neighbors were watching because it looked so pitiful to see this little bit of mulch plop out of this big dump truck.  Bob was not happy when he saw that was all I got.  I DIDN'T KNOW!! 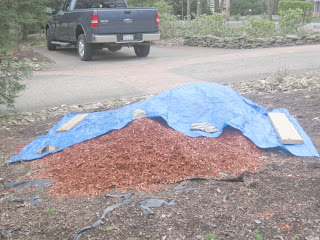 I'm determined now to make it do as best I can because I don't want to admit that I goofed up on this.  If I can get the mulch just right around the front of all the bushes it will look good.  Then this area here where the mulch is lying I may do someting else.  Rocks or planters maybe.  I'll figure it out.  Live and learn, again!  As soon as I started moving and spreading the mulch yesterday it started to rain.  That's why now the blue tarp.
I also got my little purple painted bench and watering can and flower box out. 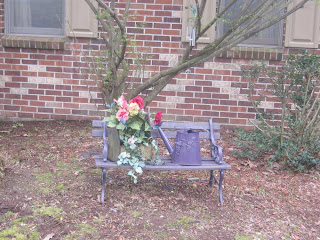 I painted it purple to go with the grape and Tuscan theme of my house.  As you can seen, this area needs mulched.
Today I got the fake plastic flowers in the window boxes upstairs. 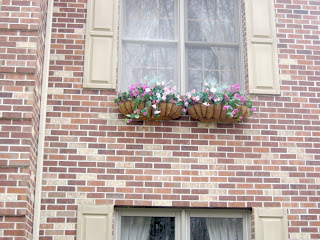 I don't use real ones because I don't want to have to open the windows and take the screens out every time I need to water them.  Since they're up high you really can't tell the difference.
Last week I worked on the back deck.  I've been wanting to get new red cushions and a red grill.  My mother suggested this because she saw them in K-Mart and she was right.  I finally got it and I love it. 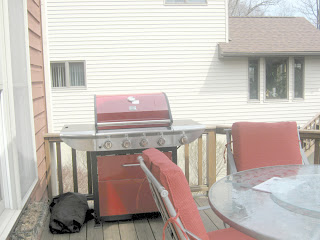 I also spray painted all five of these chairs.  The set is five years old and is very good and sturdy, but it was getting rusty.  I found silver hammered metal spray paint by Rustoleum and it worked great.  They look brand new.  The new color scheme for my deck is this red, with green and some gold. 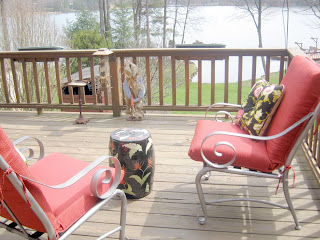 I was in JoAnn's and they had these on clearance. 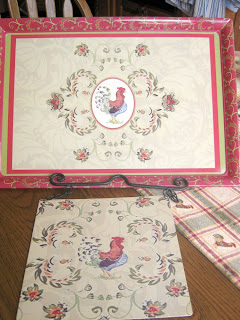 The wallhanger is hanging outside on the wall behind the table.  It was $5.  Then the tray was marked down to $1.50 because there is a little ding in it.  I didn't even notice.  As you can see, they also match the table runner on my inside kitchen table.  I was so excited about these little finds.
That's it so far.  It's obviously too early here for flowers and plants to go out.  I did good for only being the first week of April.  I usually don't get this far until the end of May.  I guess for good reason.  There's even more snow coming down right now.  We went from summer back to winter within 24 hours.
at 3:09 PM 10 people had thoughts about this