Oh my, it's been a busy week.  This was my first day in a week to spend alone in my own house and get some cleaning done here.  It's Friday, 5:00 p.m., and I'm finally sitting down with a glass of wine and catching up on my writing.  My Bob should be home shortly and is bringing home Chinese take-out.  This has become our new Friday night ritual.  We used to go out to dinner on Fridays, but we just don't feel like going out, especially in this weather.


The snow just keeps coming down.  Those schools that didn't close today ended up dismissing early.  I keep measuring the amount of snow by looking at how much is piled on my back deck railings and table. 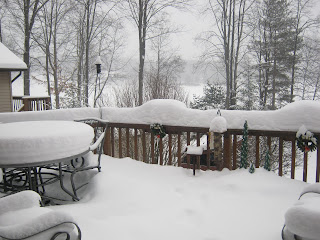 We need to get this shoveled off soon or it's going to get too heavy. 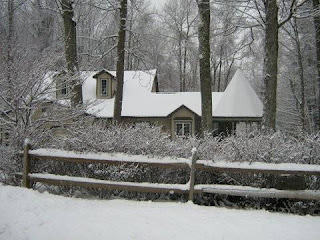 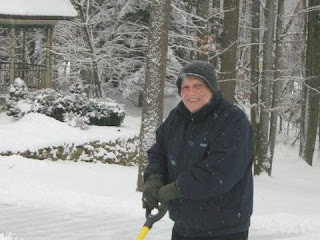 My dad shoveling.  I know he's smiling, but he's not really having fun.

It's also very cold outside.  It was 8 degrees at 9:00 this morning and it's 16 degrees at 5 pm.  It's beautiful if you're lucky enough to be inside a warm house.

Last weekend I wasn't so in love with this weather.  We moved Austin and family about 50 miles away, but with the back roads and the bad weather it takes about an hour and a half to get there.  Bob and Austin loaded the U-Haul themselves and I don't know how they did it.  I helped on the other end and spent the night with them Saturday night so I could continue unpacking and cleaning on Sunday.  It was so late, dark, cold and snowy that the U-Haul didn't get un-loaded until Sunday morning.  What a job!!  Bob and I came home Sunday and Bob said he felt like he just ran a marathon and I said I felt like I was hit by a truck.  We made a promise to each other that our furniture moving days are over.  The boys can find friends or hire professionals.  They have too much stuff now and we're getting too old.  We can do it, but the recovery time has increased greatly.

On Wednesday I went back down to the kids' new house with a car load of left behind items and continued the unpacking and cleaning.  The house is nice with a lot of potential, but it was really left dirty by the previous tenants.  I'm tired of cleaning but I can't make myself stop when there is still more to do.  I came back home Wednesday night and will not allow myself to go back down until maybe next Wednesday.  As long as Melissa is still asking for my help I will continue cleaning, fixing and decorating.  With her being pregnant I don't want her to lift too much or move furniture.

After I got home on Wednesday, exhausted and sore and getting into a hot bath, my #2 son, Brandon, called from Spokane.  It was 10:30 at night and I was surprised that he called that late, but he was telling me about their move into their house on Monday (see, if we're not there they find a way) and that they have a new mattress and new washer and dryer ordered and to be delivered when Diana returns from her visit here.  Diana arrived at her parents in Pittsburgh last night and she and Baby Riley will be stopping by my house tomorrow.  So I'm thinking to myself, why is he calling me so late and telling me this.  But I'm glad he called me so I'm asking questions about the house, mattress and washer and dryer.  Then he says, "and we also have another baby coming in August".  Oh My!!  Baby Riley is only 7 months old.  I am thrilled, though.  Brandon said that is why they called me first, because they knew I would be excited.  They were surprised but happy with the news themselves.  So now I have two new grandbabies arriving this summer.  That will make five grandchildren in six years for us.  I can hardly believe it.

I now have more baby quilts to sew and baby sweaters, hats and booties to knit.  I just don't know how I can keep up!  I can't sew and knit fast enough!  I think we may be done with new babies after these next two, but I said that seven months ago!