I have to brag a little about my kids. I do that a lot, but I won't apologize for it. When my boys were teenagers we went through some very rough and tough moments. They were good boys, we told them, but they were not always doing good things. Mostly teenage boy stuff, but stuff we didn't like. It didn't matter to us that "everyone else is doing it". We continued to talk, lecture, punish, love and encourage. Now, Austin and Brandon are 28 and almost 27 and we couldn't be more proud of the wonderful men they have become.


A few weeks ago, Austin had worked late and was on his way home from his office. He is an Air Force Recruiter. He goes to work most every day in his dress blue uniform. You know, the one that makes them look so handsome, with all the medals and stripes. This particular day there was a very hard rain and wind storm and he happened to be right behind a young girl that hydroplaned on the wet pavement and did two 360's and wrecked in front of him. He stopped to see what he could do to help her. She was very shaken, but seemed to be OK. He calmed her down, called the police and her grandparents that lived close by. He then stayed with her until all parties showed up and he knew she was in good hands. Then he continued on his way home.


In all the fright and confusion, the only thing that this girl and her grandparents knew about Austin was his last name, as it was on his uniform, where he was from, and that he was a Sergeant in the Air Force.


Well, yesterday, we received a phone call from a lady and my husband had answered the phone. Through the course of the initially confusing conversation, it became known that she was trying to track down Austin in order to thank him and send him a card. She then kept My Bob on the phone for quite a while praising us as his parents for the good job we had done in raising such a fine young man. She even started to cry on the phone.


I told Austin about the phone call and told him how proud we also are of him and how nice that was of him to stop in such a storm and late in the day. He said, "That wasn't being nice, anyone would have stopped for something like that". No, I don't think they would. I would like to think that most people would have stopped as he did, but I don't know. A lot of people don't want to get involved or be bothered and would have just wizzed on by.


Here is Austin and myself at his brother's wedding a year aog. I need to get a picture of Austin in his uniform because he really is so handsome. 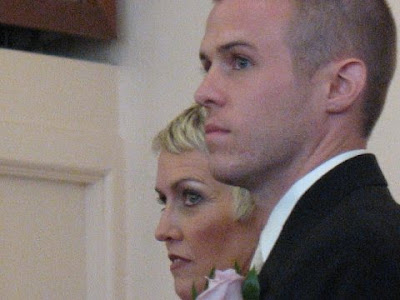 Then I just needed to share this Cutey with everyone. This is Brandon's daughter, Riley. We haven't seen her now for three weeks, since we left Spokane. Even though she's bald, she's still beautiful. We hope she gets the strawberry blond hair back that she was born with. But I'll love her with or without hair, I don't care. 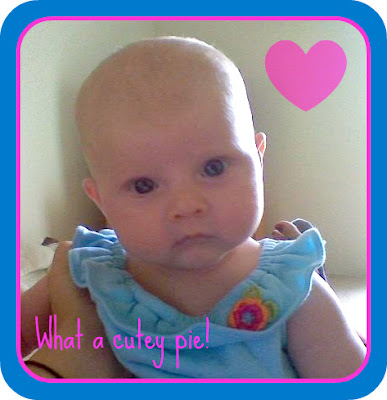 Thanks for letting me boast. I just had to.
at 5:55 PM 5 people had thoughts about this