I Tried So Hard Not to be Sick

I thought I got lucky.  I thought I was safe.  I thought the bad, dreaded, stomach flu had passed me up!  I had finally got over the sore throat, then Hubby got the stomach flu, and I was feeling pretty good and doing everything I could to stay clear of him.  I slept in a separate room, washed all his sheets, blankets, towels, toilet, sink, everything he touched.  On Monday he felt better and I was feeling good, and then BAM!  Monday night an invisible truck hit me and my whole body hurt and I couldn't sleep and by Tuesday morning the ugly stuff started.  I don't want to be too graphic, but it's the kind of sick where you just can't get out of bed so you keep a bucket and towel next to you and the pains in my stomach were so bad I thought I was dying.  I think I pretty much proved that no matter what you do, or how clean and sterile you are, if you live in the same house and breath the same air, you're going to catch what the other one has.  This is where I spent my Tuesday.  From here: 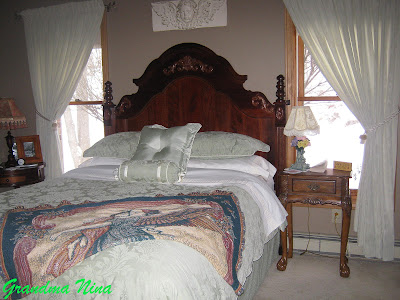 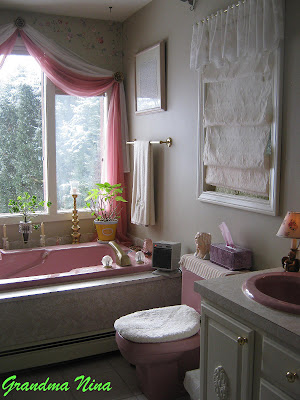 And back again.  These pictures are after the clean up.  I wouldn't dare have shown the ugly before!

If I could have even sat up a little bit I could have done a little bit of knitting.  If my eyes weren't burning so bad and if my head wasn't pounding, maybe I could have looked through my new "Creative Knitting" magazine that Hubby just brought me from the mail box.  But NO!  NO could do! 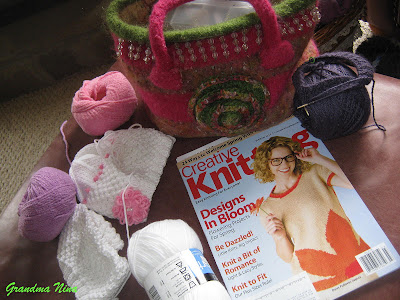 Hubby took the babies to the groomer for me.  At least they were clean and smelled good, unlike their Mommy. 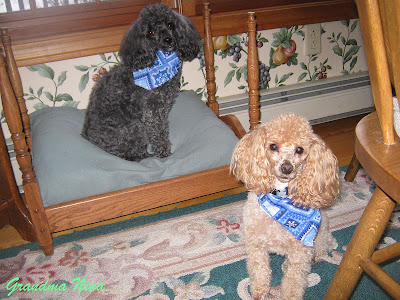 I was starting to worry that I wouldn't be able to stay awake long enough or feel well enough to watch the first night of American Idol.

I wait for that show for eight months to start back up.  I always make sure I don't schedule anything else for the night's that it's on.  I took a nice nap in the afternoon and Hubby brought me some Advil with my Ginger Ale (my one and only meal of the day) and I was able to actually sit up a little bit and knit while I watched American Idol.  It was good!  I wasn't sure what to expect with Jennifer Lopez and Steven Tyler, but I think it's better than ever.  Can't wait for tonight.  It's going to be a good season.

Now today I'm on the mend again.  I'm weak, several pounds lighter, food looks terrible to me, but I'm on my feet.  Back to more cleaning, scrubbing and sterilizing.  I'm just so glad the timing was such that this was the week that the kids aren't here.  If it could have been worse, that would have done it!
at 4:54 PM 5 people had thoughts about this