Oktoberfest party in Cincinnati, two weeks ago.  Sorry I'm so late in reporting! I think I've got too much going on, by my own doing, that I'm having trouble staying caught up.   The weekend of October 16-19 was a busy, fun and productive one.
My brother and his wife had invited us to their big Oktoberfest Party and we had been wanting to make a trip to Cincinnati (6 - 6-1/2 hours away) for a while now, so this was the perfect time.
I lived in Cincinnati, with my family, back in the 70's during my high school and college years.  My two brothers still live in that same area.  My husband is also from Cincinnati and his family is still there.  We try to get back at least once a year.
This particular trip included My Bob and I, my parents, my son Austin, and my little toy poodle, Fergie.  My parents, Fergie, and I left on Thursday.  No particular reason why the three of us wanted to go a day earlier than Bob and Austin other than to have more time with my brother, Chuck,  and his wife, Jill.  I drove the whole way with Mom in the front so we could talk and Dad sat with Fergie in the back so he could spend six hours on his new little wireless computer.
When we arrived, we noticed the huge enclosed tent that had just been delivered and set up in Chuck and Jill's large back yard.  Complete with plastic windows, a heater, and tables and chairs for 75 people. 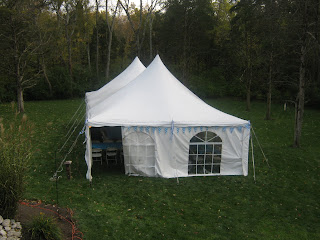 Chuck and Jill have a beautiful home on a large lot and throw great parties.  They requested on the invitation that everyone bring a 6 pack of German beer.  We're not beer drinkers, so we brought German wine.  They also had two kegs of beer being brought in and we found out when we got there that Jill was making most of the food herself.  So Mom and I contributed to the preparations as best we could.  There was cabbage boiling for two days for braised cabbage, and I think 30 pounds of potatoes being peeled for German potato salad.

Now back home, Bob rented a small U-Haul.  His sister had gifted to us an antique Larkin Victorian fainting couch that she had and no longer had a place for.  She knew I had a perfect place for it and she wanted us to have it.  She had it re-upholstered and it's beautiful.  We had to have a way to get it back to Pennsylvania. 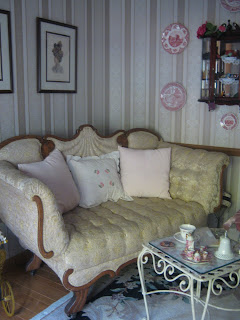 This is it all set up in my piano/tea room once we got it back home.   I am now on the search for an antique little coffee table to replace this white iron table.  It just doesn't go with this.  The back and sides of the couch fold down, which I will probably never fool with.  Isn't it pretty?  This is the little bench that used to be here, and it really never belonged. 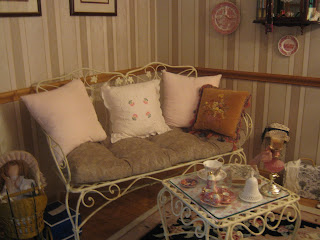 This is where the white bench is now.  In my dining room in the bay window.  It gets a lot of use here. 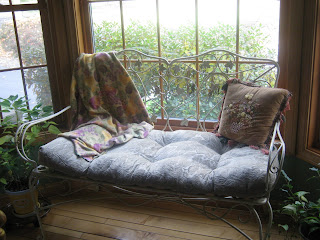 The reason for getting the U-Haul round trip was because I had been cleaning and had quite a pile sitting in the basement for Goodwill.  So did my mother.  My sisters-in-law, five of them, asked to please not take everything to Goodwill.  They all love Goodwill stuff and wanted it all.  And I'm always impressed at the knack they have for fixing up and arranging their "finds" in their homes.  So Bob and Austin loaded the U-Haul and arrived in Cincinnati Friday night.

The other major reason for the Cincinnati trip was to see my mother-in-law.  This is why Austin decided to arrange to make the trip with us.  DIL Melissa stayed home with their boys.  Bob's mother is very ill with pancreatic cancer and is getting weaker.  So Friday night I met Bob and Austin at his sister's house and his mother was there, along with several other family members.  Debbie had very good food and wine for us and we had a very nice time with family.  At the same time it was sad.  Mother Millie does not look well and she cries when you talk to her.  I would, too.  On a good note, we got to see our niece's new baby boy. 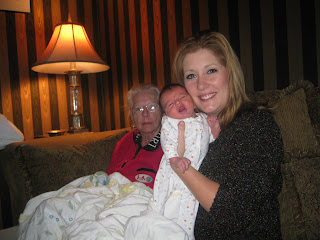 He's about 1-1/2 weeks old here and is beautiful.  This is Roxanne's fifth child.  She's a good mother.

Now, back to the Main Event.  Saturday  is Oktoberfest Day.  The signs and posters got hung, the port-a-potty was delivered (Jill didn't want all those drunks messing up her beautiful home and I don't blame her), the kegs were delivered and the cooking continued. 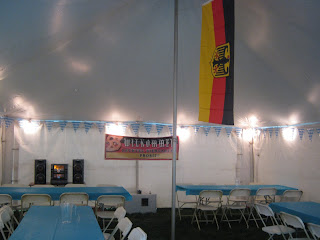 Jill's sister also brought deep fried goetta balls and deep fried pickles.  Oh my gosh, were they delicious!  I don't know if everyone knows what goetta is.  I only ever see it in Cincinnati.  It's a sausage mixture and it is so good.  By 6:00 at night the German music was going in the tent and the people started pouring in.  My brother swears that he had the 3rd largest Oktoberfest Party in Ohio.  I believe it.  Fun was had by all and some had way too much beer.  It was fun to see some of my brothers old friends that I hadn's seen since they were little kids.  Sunday morning was clean-up day.

Bob and Austin headed back home with U-Haul in two on Sunday morning.  Mom, Dad and I stayed one more day.  My nephew and girlfriend also had a new 1-1/2 week old baby girl, Natale, and we got to visit with them on Sunday afternoon. 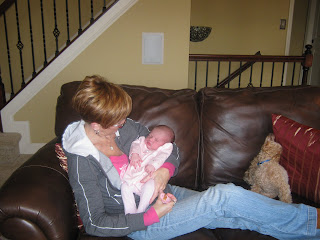 This is me with my new little niece.

We had a great trip.  Very busy, fun, a little sad, a lot happy, and productive.  A lot crammed into a weekend.

It took me about a week to recover.

I need to shorten these posts up a little bit, but so much happens all at once.  I should divide our events up in chapters, I guess.