Trying To Do It All

I just can't get it all done!  Too much to do, so little time!  I know, I say it all the time.  Most of us say it all the time.  Why?  How does this happen?  What to do about it?  It's not just the "Have" to do, there is also the long list of "Want" to do's.  Then comes in the issues of prioritizing, organizing and scheduling.  A big problem I have is feeling guilty if I put a "Want to" ahead of "Have to".  I feel like I can't do something I want to do until I have everything on my "have to do" list finished first.   At almost 53 years old, should I still be feeling like this?
Now, sometimes the "want to's" and the "have to's" are on the same list.  Such as cleaning the house, which I really do sort of like to to, and cooking, which I like to do if I'm not rushed.  Outside work and gardening I like to do, but it is very time consuming and by this time of year I'm really almost tired of this job.  By the way, the last couple of days here have almost felt a little Autumn like and it feels good.  I think I'm almost ready for it.
If I could have a whole day of "wants", I would do a half hour of yoga or some sort of exercise in the morning, have my yogurt and coffee, then sit on the deck for a while and knit, then start a new miniature quilt that I've been wanting to do, have a quick and easy bite of a small dinner, watch the television shows that I like to watch while I knit some more.  All of this without an interruption or a request being made of me.  Dream on!!
When the grandkids come to visit, both lists are pretty much set aside.  Some of the "have to's" still get done to a very limited degree.  And now with almost five grandchildren, the time spent with them is priority whenever possible.  Last weekend we took the two grandsons to the county fair.  We had just as much fun as they did. 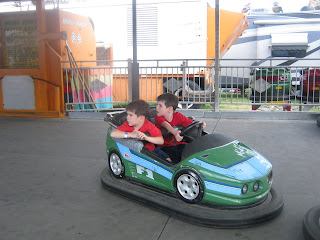 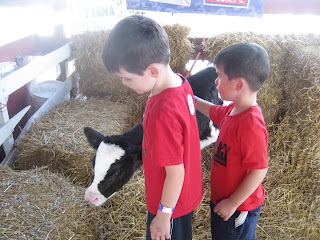 The following day was Logan's 6th birthday party.  Bob and I and the GG's (my parents, the Great Grandparents) travelled the one and a half hours to my son and DIL's house for his little party.  It was a fun time and it also gave me the opportunity to hold my new little Leanna, now 6 weeks old. 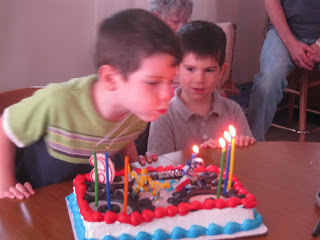 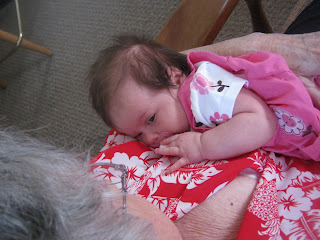 Here's Little GG (my mother) holding Leanna.
Anyway, I got a little off my topic there, but I just had to share about the grandkids.
This week, the kids weren't around since they are in New York with their mother visiting her family.  I also spent a whole day catching up on the computer bookkeeping for our business.  I mean, a whole day!  I sat at this computer from 9 am until 5 pm.  My butt was sore.  I shouldn't let it get so behind like that in the first place.
So now where does all that leave my knitting, sewing and blogging?  Yep, way down on the list.
Here's the problem with a husband that works out of the house with a wife that works for him part time and also has a lot of other interests.  This is what I constantly hear all day long:  "What are you doing now?  What are you doing that for?  Shouldn't you be doing this, that or the other?  That's not necessary!  Do that later!"
You get the idea.  Don't get me wrong.  I love him dearly and I need and want to carry my end of the load, but every so often I need some alone time!
So now on this beautiful summer/fall like day I'm going to take the dogs for a walk and ponder my "have to's", "want to's", and priorities and make some mental notes of adjustments that need to be made.  Then this evening my home alone son, my parents, Bob and I are going to see "Elvis".  Yep, that's right!  I'll take pictures.
at 12:15 PM 8 people had thoughts about this