Busy Weeks Go By So Fast!

Have you missed me?  This has been such a week.
My computer kind of died on Monday.  It just kept shutting down right in the middle of things.

I couldn't work on it like that.  Got it to the computer fix-it shop and it looks as though the fan and motor just needed some cleaning.  Working good now.

We also got the grandsons on Wednesday since their mother had another sonogram on Thursday and then left from there to go for her Air Force Reserve weekend in Pittsburgh.  Their dad, (our son, Austin), works long hours as an Air Force Recruiter and does quite a bit of travelling so they just brought the boys to us until Sunday.  They are really good and very sweet, but I get so worn out.  I wouldn't have had time to get on the computer even if I had one this week. 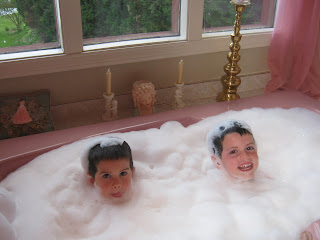 They love getting a "tubby" with bubbles in the jetted tub.
My other DIL, Dee, and my granddaughter, Riley, are in town from Spokane for two weeks.  They split their time between her family in Pittsburgh and the rest of the family here.  We got to see her Wednesday and Thursday.  What a doll baby.  Dee looks real good.  She's also pregnant and due in September. 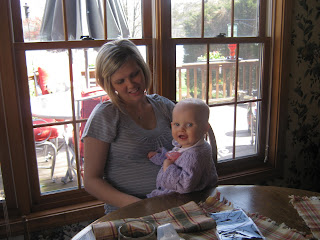 They're having a boy this time. We now have a pattern that seems to be evident; the DIL's gain more weight being pregnant with girls versus pregnant with the boys.  Interesting!

I had all three of my grandchildren with me at the same time for one day.  That's only happened twice now.  I'm a lucky grandma.  I can't wait to be able to get pictures after September of me with all five of them. 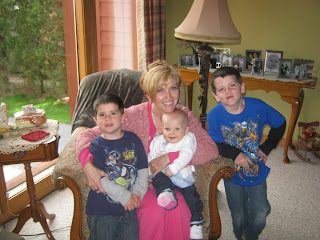 We had a frost for two nights in a row and it looks as though my yellow dahlias didn't make it.  I covered them each night.  The red daisies did just fine, though.  Now today was a beautiful, sunny and 80 degree day.  I was able to clean off some of the yard furniture while the boys played outside.  Work time is cut in half with them, though, because of the potty runs and food and drink requests.  Then at 2:00 I took Logan into the doctor for his shots needed for kindergarten in the fall.  Oooh! he was real brave until those needles went in, then what a scream.  Then the little sweetie apologized to me for crying! Ahh! So like any good grandma, we went to Wal-Mart for a new Transformer and then an ice cream cone. 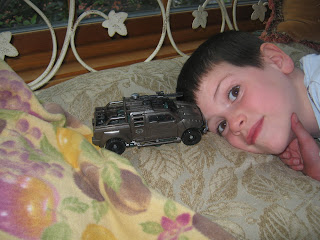 He was as happy as could be instantly.  I just can't believe he'll be in kindergarten!

Austin came up for tonight and tomorrow to be with his boys and then he has to work at a marathon in Pittsburgh on Sunday.

Oh, almost forgot!  I'm also trying to finish the pink and brown baby quilt for Melissa's baby shower that I'm planning for next Saturday.  I got the newborn hat and booties finished. 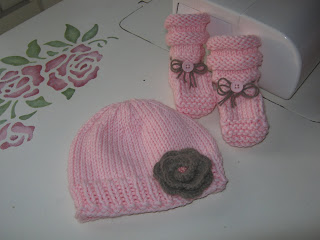