I've been waiting for this for six years!  Not a new diamond ring!  Not a nice fancy new outfit!  Not a new car!  But a remodeled little powder room.  Isn't it funny how priorities change over the years.  I love to be creative and this extends to the remodeling and decorating of my home.  I not only like it to be nice and new and clean, but I like it to be a little different.  I like someone to walk into the room and say, "Wow, that's so different.  How did you do that?  Where did you get that idea?"

My little powder room is original to the house and still has the old builder's grade materials.  I've worked with it this way and tried to make it as "cute" as I could.  I sort of had ideas in my head as to what I wanted to do and knew it wasn't going to be real cheap or easy, as most remodels aren't.  So I waited.  Now the time has come.  I knew what I wanted and I set to work on finding the pictures that were in my head.  It's still a work in progress, but as promised in yesterday's post,  I'll show you the development so far.

To start with, here are the before pictures. 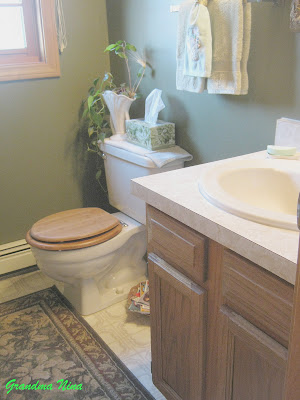 Notice the solid green walls.  This was also the ceiling color.  This counter top just grated on my eyes.   I hated it!  And the vanity is just plain and cheap grade. 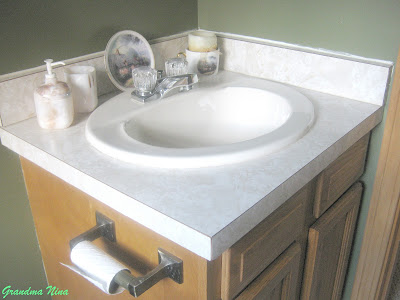 I did what I could. 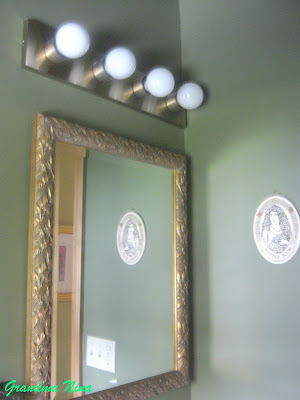 I had replaced the plain sheet of glass mirror that had been up and I am going to keep this new mirror.  I also like my little ceramic plaque that says "powder room".  But that ugly light bar above the mirror was also something that grated on me.

Hubby and I got to work last week taking down the hardware and fixtures and removing the old countertop.  I decided to keep the vanity because I had a plan in my head for that.  Of course, nothing is as easy and quick as you think it's going to be. 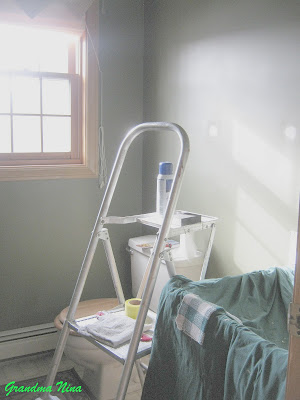 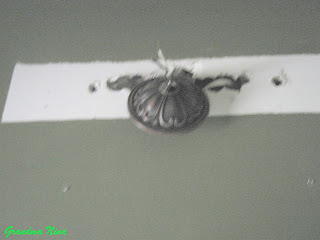 When the old light bar was taken down the hole left behind was huge.  This is the base of the new light fixture to show that there is no way it's going to cover up this mess.

In the meantime, I was able to hire my wonderful talented friend, Brenda, that does faux painting and murals.  She was able to squeeze me into her busy schedule and was coming last Friday.  So now we had to get the holes fixed by Thursday night. 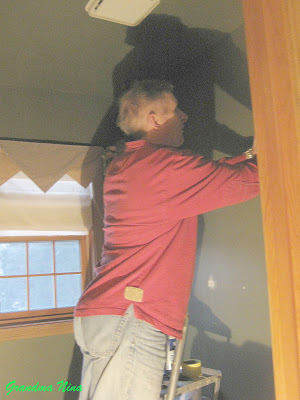 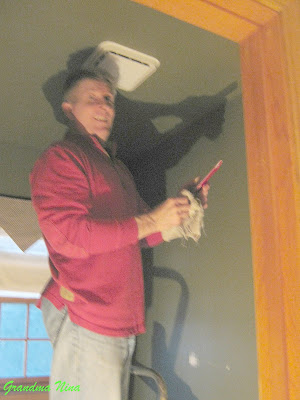 Hubby worked into the evening but of course he had to turn the electric off in the bathroom and was working by lamp light.  I know he was frustrated but gave me an encouraging smile anyway! 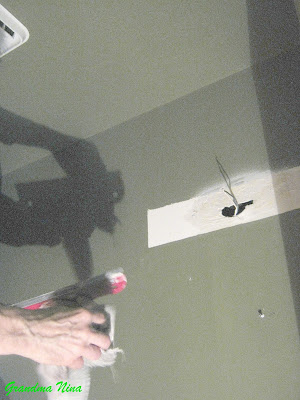 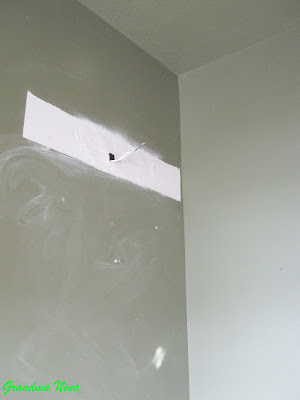 It was coming along.  I knew it didn't have to be absolutely smooth and perfect because of the painting that was going to be done.

In the meantime, the week before last, we had ordered the countertop 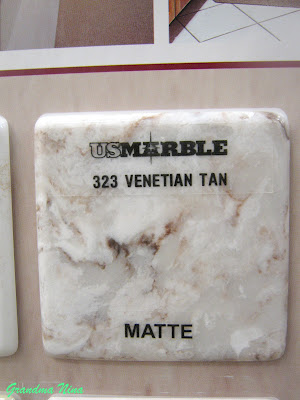 and copper sink (This was the floor sample that had been dropped and is bent.  Ours will be new, of course) 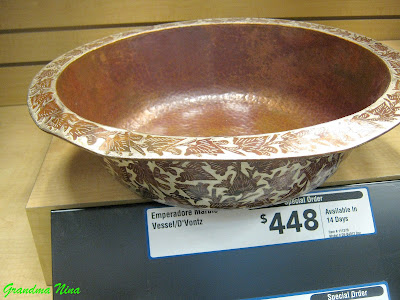 Brenda came in Friday morning and she also had done my foyer shown here.  She knows me and the style I was going for.  I wasn't able to be home on Friday, so I described the pictures that were in my head as to how I wanted this tiny little bathroom to look.  I wanted  Tuscan style, with leaves and vines, but no flowers.  I wanted to keep the green walls but a lighter shade with a Tuscan wash, and I showed her pictures of the counter sample and sink.  We also already have the darling little chandelier that is going up, so she was able to see that.  Brenda is amazing.  I came home Friday night and it's just like she got into my head and could see the pictures that were in there! 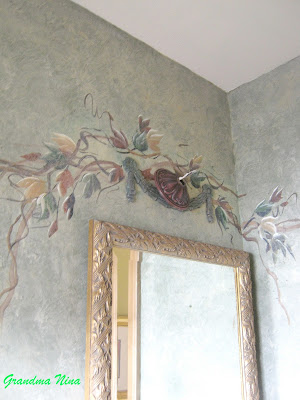 This is now the wall and area above the mirror where the new light fixture is going to connect.

I had also pointed out to Brenda a little cupboard that sits in my hallway on the other end of this bath and told her I wanted the vanity to look something like that. 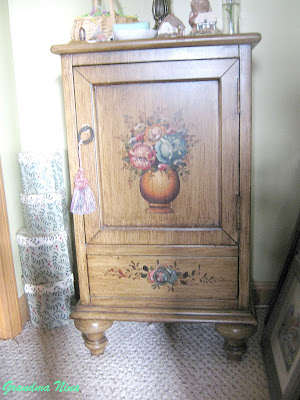 And this is what she did! 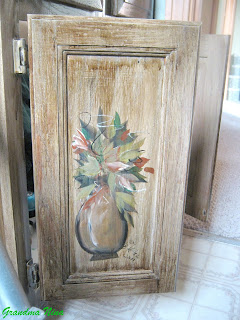 Similar but with no flowers.  Exactly what I wanted. 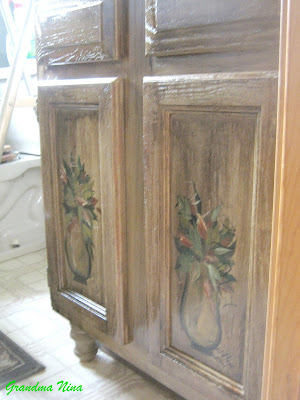 And notice the wooden feet she bought and put under the bottom lip.  Perfect!

Brenda is coming back tomorrow just for a few touch ups.  She had also run out of light while working and missed a few spots.  I hope tonight Bob has time to get the new light up.  We expect the new fixtures to come in next week.  I'll keep you updated!