My Baby Boy, the Survival Trainer

We are so proud and excited!  Our youngest son, Brandon, just found out he passed his final exam for SERE.  Brandon has been in this 6 month training program with the U.S. Air Force and now he will graduate next week.  SERE is a Special Ops course that stands for Survival, Evasion, Resistance, Escape.  They are a very specialized  part of the Air Force that very few men qualify for and even fewer make it all the way through the very intense physical and mental training.

Brandon graduated from Penn State with a BS in Hotel/Restaurant Management.  He worked in this field for a couple of years and decided this wasn't really what he wanted to do.  Well, that was a very expensive search in "finding yourself"!  I now believe it was worth it.  Brandon got married a year and a half ago to the beautiful Diana 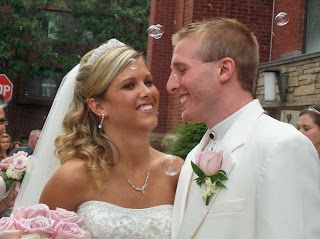 and then decided he wanted to apply for the Air Force SERE program.  He qualified and passed all the entrance exams.  Brandon was a very good wrestler in high school and in very good physical condition still, so the physical qualifications were no problem.
So then a little over a year ago, with a baby on the way, his new wife moved in with us and Brandon went off to Basic Training.  He graduated 2nd in his class of over 700 men and women and we couldn't have been more proud.
Then off he, Diana, and now precious little Riley, 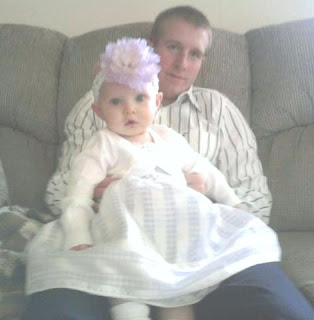 moved to Spokane, Washington (clear across the country from us) to Fairchild Air Force Base.  The first of January  of this year he was one of 60 men that began their long, hard and vigorous SERE training program.
This is the SERE Creed:

"I am a SERE Specialist...
I am an expert in Survival, Evasion, Resistance and Escape. I can survive anywhere in the world and prepare others to do the same. I prove myself by deed and action. I respect every warfighter and consider their needs before my own. I will remember that the lives of those I influence rest in my hands and if they fail the failure is mine alone. I will keep myself in top physical and mental condition, I will never tarnish the honor of fellow SERE Specialists, and I will accept no less from my peers. I do these things so they may:
'Return With Honor'"

If anyone is interested, following is video showing the training that these men go through.  I didn't see this video until about a month ago and I'm glad I didn't or I would have been that much more worried and stressed than my normal nature was anyway.
See video here

Now he's done.  26 of the 60 men that started out actually made it all the way through.  They not only have to be able to physically and mentally survive any situation, including torture, these men now also have to be able to train others to do the same.
Graduation ceremonies are next Friday at Fairchild Air Force Base and Bob and I will leave from Pittsburgh on Wednesday to be there.  We can't wait and are so excited.  Brandon will received his special gray beret worn only by SERE  Specialists.
We're also very excited to see one year old walking now Riley, and the beautiful 6-1/2 month pregnant again Diana.  They have also moved into a bigger 3 bedroom house that we haven't seen yet.
And once again, we couldn't be more proud!
at 11:33 AM 11 people had thoughts about this