All In a Day's Work

I seem to remember back in the recesses of my memory that when I was a young wife and mother of two small, very active boys, and I was the owner and manager of my own insurance agency, I feel like I had more quiet and free weekends than I do now.  How is that even possible?  Or is my old mind just playing tricks on me and I'm experiencing very selective memories and/or possible dreams?  I don't know.  All I know is that I have not had a weekend to myself where I could just do whatever I wanted to do, which would include doing maybe nothing at all, in a very long time.
Early Saturday wasn't too bad.  I started the day freshening up the bathrooms and making sure sheets and blankets were clean in the guest rooms.  Austin and Melissa and the boys were coming in the afternoon and spending the night.  Sunday was going to be spent cleaning out the rest of the leftover debris from their old house here in town.  This consists of the small house where they lived with a detached garage, and guest house/office that they rented out.  To their credit, they are getting rid of everything that they no longer use, need or want.  So they had a dumpster brought to the house and we were all going to help clean out and throw away.
Well, since Friday had been Melissa's 27th birthday, I told them I would have a nice dinner on Saturday evening and a birthday cake.  Mom and Dad were to have left for their drive to Florida on Saturday morning, but due to bad weather in Virginia and the Carolinas they postponed their departure by 24 hours.  So they also came for dinner.   The dinner, consisting of pot roast with vegetable and noodles and fresh Italian bread was very nice and the chocolate cake (from the bakery, I can't do everything) was so good.  The evening was very enjoyable and going very well, except that Logan, our 5 year old grandson, did not want to eat the main course.  He fussed and fussed about not liking it and only wanted the chocolate cake and ice cream.  His mother told him he had to eat some meat and potatoes before he could have the desert.  He finally forced it down very unwillingly and with a lot of drama and fuss. 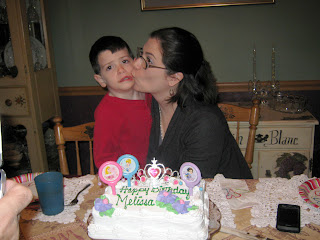 He doesn't look very excited yet does he?  He is so dramatic.  Notice the cake had to have a princess theme because the boys requested it saying that their mommy is a princess.  So that's what I did. 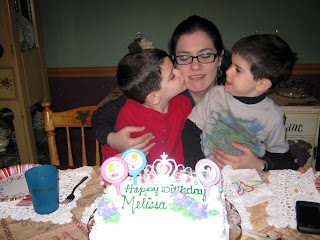 Both boys gave Mommy a kiss before we sang Happy Birthday. 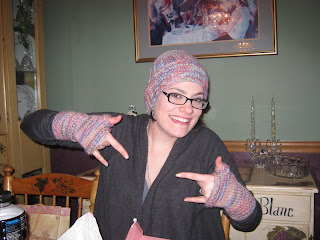 Melissa modeling the hat and fingerless gloves I knit for her.  This yarn is a Baby Alpaca and is so soft.  I need to make some more.
We all went to bed fairly early since we wanted to get up early to get the operation clean sweep started and hopefully finished in one day.  Austin and Melissa went downstairs to the guest room for the night and the boys went upstairs to the kids' room and fell asleep watching a movie with their Grandpa Bobby.  Bob came down to bed and soon after that I hear crying upstairs.  Anyone that's a mother knows that sound that you don't lay there and think twice about it.  I ran upstairs just a little too late to get Logan to the bathroom and he had thrown up all the cake and ice cream all over the bed, comforter, his pajamas and all.  What a mess!  Didn't even wake up Landen, though, who was sound asleep in the other bed right next to him.  Thank goodness.  So I stripped the bed, changed his clothes, layed towels all over the bed for him to now sleep on and put the bucket (you mothers know what I'm talking about) next to the bed.  Logan, in this sweet little pitiful voice says, "I think I had too much sugar".  I couldn't help, even at that moment, but to laugh and agree with him.  He said he felt better, so I didn't bother anyone else in the house and went back to bed.  I was into a really good sleep when about an hour and a half later that same sickly cry could be heard from the upstairs bedroom again.  Up I jumped, and as I'm running up the stairs I'm thinking I hope he hits the bucket.  Nope!  All over the towels.  Same procedure as earlier.  I started a load of laundry now before I got back in bed.  Still no one else in the house hears this or at least they're all ignoring it.  And I really didn't want to wake up Austin and Melissa because I already thought that over and didn't want the next day's cleaning schedule to be disturbed.  This ended up going on every hour or so for the rest of the night.  I felt so bad for my little guy.  Neither one of us slept much at all, obviously.
Then on top of all that mess and disturbance, at about 6:30 in the morning, I had just layed back down, and Bob says, "Why is the bed wet?"  Here, my little Fergie had peed in bed.  He's never done that.  I  must have disturbed him with my getting in and out of bed and he woke up and thought it was morning and time to pee.  Since I paid no attention to him he fell back to sleep.  I just figured I may as well give up on sleeping altogether and just kept the washer and dryer going from that point on for the rest of the day.
So Sunday morning went as planned for everyone else, thank goodness.  Landen went to an old neighbor's house to play for the day.  Austin, Melissa and Bob went to clean, in 2 degree weather, and Logan and I actually spent a nice quiet day at home.  I actually maybe ended up getting the better end of the deal.  I stayed warm, even though I was exhausted.  And Logan seemed to be fine by late Sunday morning.  We don't know whether it really was too much cake or a 12 hour bug, but he's fine now.
I heated up leftovers for dinner after the three of them came back home cold, tired and hungry.
The dumpster is filled and Wednesday Melissa is coming back to town and I'm going to go in and help clean the house with her.  Floors, bathrooms, stove, refrigerator, etc.  They need to get it ready to show for rent and/or to sell by the first of March.
Sunday evening we got a call from Brandon telling us about his two week survival training mission in the woods.  He just got back home on Saturday.  He couldn't even communicate with Diana, his wife, while he was on this training.   I'll tell you about that next time.  It's 8:00 pm and time to get off the computer and go make something.
at 8:12 PM 7 people had thoughts about this