I can't believe it's been almost a week since my last post. (It sounds like I'm at an AA meeting or in a confessional, not that I have experience with either) Where do the days go? Last Saturday I spent the morning cleaning, because I have to do that before I go away anywhere. Then when I get home I'm able to relax and it feels more welcoming when I walk in the door. In the afternoon my parents took Ellie Mae and Fergie, along with their dog, Lilly, to the dog sitter. I did the laundry and packed a bag. Even though we were just going away for one night it seems just as much work as getting ready to go away for a week. Saturday evening we went to my good girlfriend's (Paula's) house for a small get together. I have a group of very good girlfriends that used to get together all the time and now it seems life has gotten in the way of that. We still try to arrange it whenever we can, though it is a much more rare occasion. Last Saturday night it was a couple's get together and not just "the girls". The evening weather was beautiful , with the feeling of Fall in the air. We had a great time, and stayed much later than we thought we would. 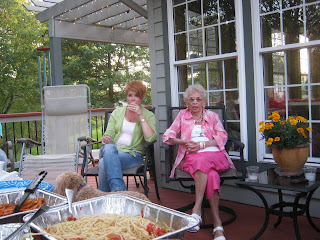 Paula on the left and my good friend's (Francey's) mother, Dorothy, on the right.

We got back home shortly after my cousin, Brad, and wife, Jane, and their children, Grady and Libby, had arrived from Harrisburg. They were spending the weekend at our house and visiting Jane's family and Grandma and Grandpa in the nursing home. I enjoy their visits and felt bad that we had to leave so early the next morning, so I stayed up until about 1:00 a.m. talking with Brad and Jane.
My Bob and I got up at 6:30 and we were out the door by 7:30, picked up Austin and the boys and met Mom and Dad at the convenient store so that they could caravan behind us as we drove to Buffalo, New York. Unfortunately, Austin was not feeling well at all, so he slept. It was a beautiful day and we arrived at the Family Reunion by 12:30. It was one of our smaller reunions and I expect it to go by the way side after a few more years. The older generations are dying out and the younger generations hardly know each other and I don't see them showing enough interest. We had a great time. I love seeing family that I haven't seen in a while. The grandsons were very good. The highlight for them was when we went back to the hotel to swim in the pool. Monday morning, Labor Day, we drove to Niagara Falls. Austin was feeling a little better, but the little bug he had was still hanging on. We had to stay on the American side because Austin didn't have a current passport. With the new laws, Canada will let you into their country with a birth certificate and a photo ID, but United States won't let you back into the country without a passport. I explained that Austin had a military ID and the border patrol said that didn't matter because a U.S. Military ID does not prove U.S. citizenship. Isn't that something? But the American Niagara was very nice and there was much more to see and do than I remember from 20+ years ago. 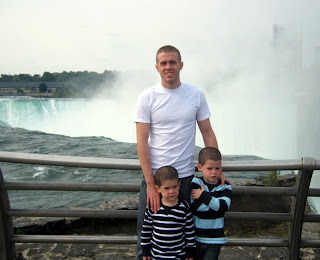 Austin, Logan and Landen with the Falls behind. 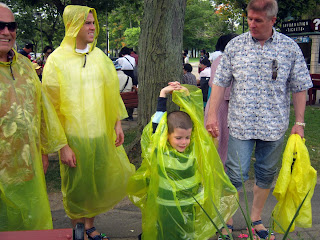 Big G.G (My dad), Austin, Logan, My Bob getting geared up to go into the Cave of the Winds. 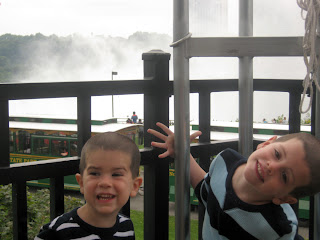 We had lunch at the restaurant overlooking the Falls. It was very nice and a great view. The boys were having a great time and yelling to people walking down below.

It was a great family weekend. The timing of the weather was also perfect. It was sunny and warm until we headed back home and then it turned to Fall. It started to rain a little and the temperature dropped. I'm OK with that now. Summer is over and I'm ready for the new season.