A nice, cozy, lazy day at home.  It is freezing outside, so we're staying in.  I'm going to make a pot of homemade, well ---- semi-homemade, chicken noodle soup with some hard crust whole grain French bread.  One good thing that has at least temporarily come from our bad, ugly flu week is that we feel like we need to eat lighter and healthier.  If it feels too heavy or greasy it just is not appetizing right now.  As I said, this may be temporary, but I know my stomach feels much better eating like this.

It's also the football playoffs tonight.  I'm not much of a sport's fan at all, but since we live in Steeler country, you can't help but get caught up in the excitement around here when the Steelers get to the playoffs.  It will be crazy Steeler country if they win tonight.

(Sorry so blurry, but it was free clip art)
So I'll be watching the game tonight, even though I don't really understand football that well.  The commercials and half time are always good.  I understand they are expecting the temperature to be about 12-15 degrees in Pittsburgh tonight.

Yesterday Mom and I went to the baby shower for my girl friend's daughter that is adopting 15 month old twin girls from Africa.  She leaves for Malawi, Africa, in about two weeks to pick them up.  She is a 29 year old single young woman that I have known since she was 6 years old.  She and my oldest son, Austin, were friends that met in Kindergarten.  Through their friendship, her mother and I became very good friends.
The shower was very nice.  Here's the new Mommy (on the right) opening some gifts. 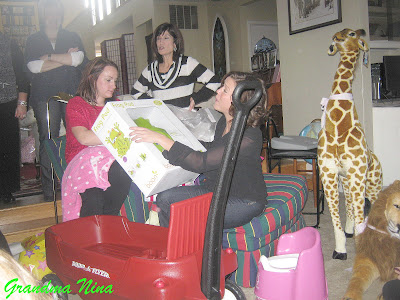 Look at these stuffed animals she got for the girls' new American bedroom to remind them of Africa. 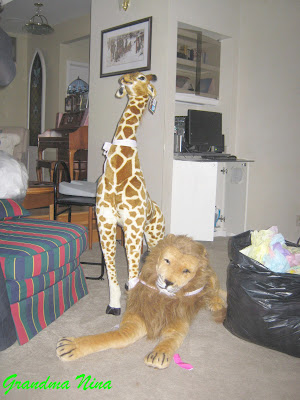 I finished the twin baby hats for her, along with a gift card.  I forgot to get a picture of the hats when I had them both finished.  Here's one finished. 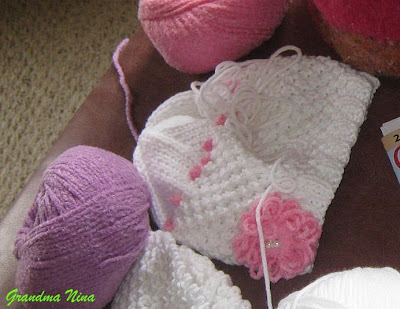 The other one was just like it except the flower and trim was purple using the purple yarn you see here.  They turned out cute.

I also finalized the ticket purchase for Spokane for DIL, Diana, and myself.  I'm going back with her to help with the two kids on the plane and then I'll stay about two weeks.  We'll leave on February 1 and I'll come back on the 13th.  Travelling is so difficult any more, and especially with a 20 month old and a 5 month old.  This would be almost impossible for Diana to handle on her own.  Besides, you have to have two laps for them to sit on or you would have to purchase another ticket anyway.  Of course, there is no direct flight from Pittsburgh.  It's not an easy trip, so I'm glad I can go to help.

I'll be watching all of the football today, LOVE it!

Oh Nina, those little hats are just precious and I love the animals! Hope all goes well with her trip bringing those sweet babies home! You get all better before making that trip again! You such a sweetheart to go along to help her out! Have a blessed day my friend, HUGS!

Lovely hat! It's so courageous of a single mom to adopt twins! She must have a great support system!

Have fun traveling with the little ones. Enjoy your visit.

We watched the last 3 minutes of the game cuz we were at our son's place to see new grandson and his big sister and mommy/daddy, of course. Son doesn't have tv and they were playing a game anyway. So hubby is happy Steelers won, as he's from PA and a fan. Glad you are feeling better and have a good trip and stay with your dau and grandkids. That's nice of you to do that. Hugs!

Sounds like you're off to another adventure. The knitted hats are darling.

Sounds like you are off to another adventure. The knitted baby hats are darling.

Ah the Steelers! My stepdaughter worked a lot in Pittsburgh and her father is the proud owner of the entire range of the Steelers football gear... cap, coat, sweatshirt etc.

Have a great time in Spokane.

The end crowns the work.