After our day on Saturday, I was just going to putz around the house on Sunday and catch up with my knitting, sewing, cleaning and re-organizing my sewing room and put up some listings on my Etsy site.  Well, My Bob decided he wanted to take a Sunday drive up north of here about an hour.  I tried to talk him out of this because I had my day all set in my head, but I'm glad he persuaded me.  We had a wonderful day and saw some beautiful parts of Western Pennsylvania.
We've lived in Pennsylvania thirty years now and I think I have only been up into Northern Elk and Cambria Counties about twice.  And I had never seen parts of the counties we saw on Sunday.  Like I said, it's only about an hour drive but there really is no other reason to go there except to site see.  And the sites really are few except for the scenery itself.  It is absolutely beautiful.  Trees, forest and just land.  Very few buildings, people or cars.  The weather enhanced this as it was a gorgeous sunny day.
Bob's initial desire for driving up there was to locate a grape orchard that he was told was up that way.  The Orchard where the winery we visited on Saturday gets their grapes.  We never did find it, but we came across the Elk Viewing Area that we have heard about for 30 years where people go to see Elk roaming and grazing.  I don't know why we never went.  I think because we see deer in our backyard daily, to the point of annoyance, so why do we want to see more of that.  Well, now I know.  First of all, the view is breathtaking. 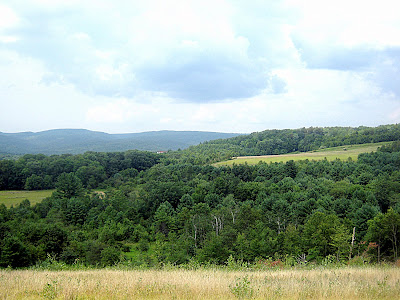 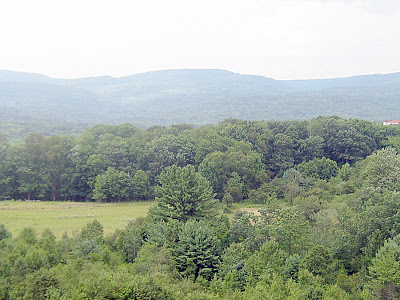 There weren't any Elk out there and we found out from the young man (Game Warden, maybe) on duty that the elk's mating season is late September and early October and that is when people are flocking up there to see.  Can you imagine the view at that time of year with the colored leaves?  We've already decided that we're going back up on some nice Fall weekend. 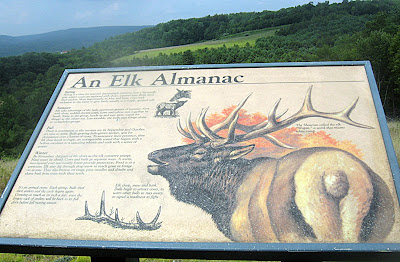 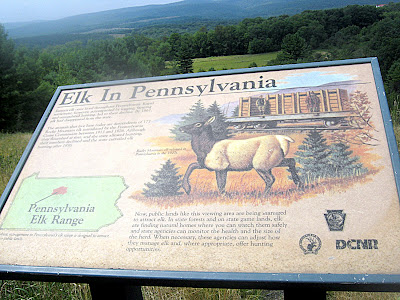 Now, I have never seen an elk before and like I said, I'm picturing in my head a deer look alike with huge antlers, as in the first board above.  Even though I've lived here for 30 years, I'm not very knowledgeable in wildlife.  Well, Bob explained that only the males have the antlers.  The second board shows a female elk.  Duh!  I just never thought about it!
So as we continued just driving around, we were just noticing and commenting on how rural it really is up there and how "rough" the people seem to live.  And as we were just driving down a back road (more back than the "main" road) I pointed out to Bob that those people in that little cabin sure had some funny looking horses in their yard.  Bob immediately got a little excited and corrected me as he laughed that those weren't horses, they were female elk. 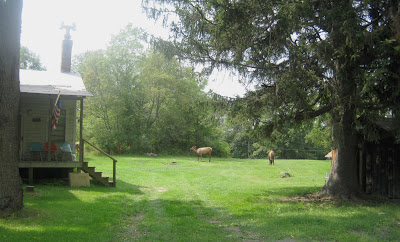 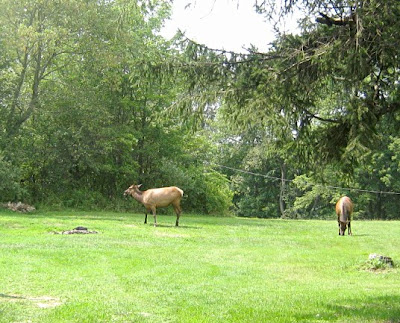 So that's what they look like!?
A little further down the road, behind another old cabin, some more were just taking an afternoon nap. 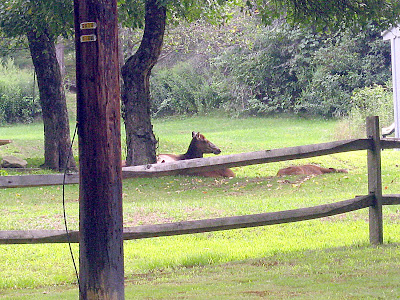 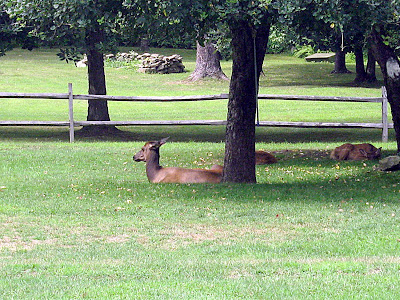 The pictures can't give you the same feeling as seeing them in person.  Now I know.  I'm looking forward to going back in the fall.  Heck, it's only an hour away!
It goes to show that there is so much to see in our own backyards.  We just don't take the time to look.
On our way back home we decided to stop in a little pass through of a town called Medix Run and have something to eat at the Medix Hotel.  We were there once many years ago in the winter.  It's actually a real hot spot.  It's one of those dives that has really good food.  It's mainly a bar with a tiny little dining room, if you want to call it that, with peanuts all over the floor.  I think the sign said, "established in 1894".  And believe me, it has not been updated except for electrical appliances since.  It's a place that motorcycle riders gather in the summer and snowmobiles in the winter. 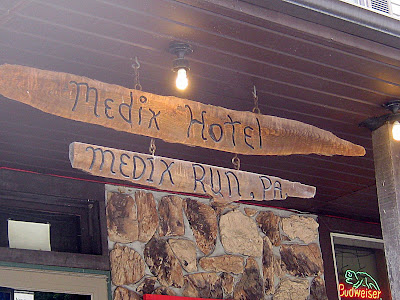 We sat outside on the deck and the wrap sandwiches were delicious.  They are especially known for their wings.  Then right across the street was a relatively new, and I say relatively because it was probably at least 50 years old, country store and gift shop.  We browsed in there for a few minutes and bought some home made apple butter. 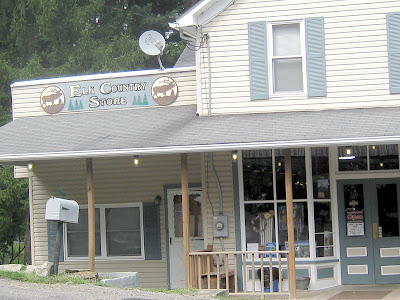 It was like a day spent transported back in time.  You feel like you're back in the Old Frontier Days.
Such fun!
at 11:08 AM

What beautiful country! And Elk!

Love the pictures Nina! I saw Elk when I went out west! Sounds like a fun drive and loads of beauty for you to see and want to see more of!

I would love to visit Medix hotel and the store across the street! Love little trips like this, makes me wanna go on a adventure somewhere close to home! There are so many neat places right in our own backyard too!

Have a blessed day my friend! HUGS!

It's amazing that you wanted to see elk and that very day, you did! What a nice little trip back in time, Nina, as you said. It sounds like a great day to me!

How fun! I've never been to Pennsylvania - thanks for the little trip! Linda

Superb pictures. What a lovely day out, and such wonderful scenery too. It was so much nicer than knocking yourself out with domestic duties. Just for a day... heavenly.

Happy I found your blog.

What beautiful scenery and what a peaceful days adventure.